Have had 2 great weekend runs and figured it was about time to take it easy. Plus this was in ECP (read: partial closure of pathway, crowded, cyclists and kids abound, long stretch). Game plan: take it easy and use it as part of a long run. To keep everyone from being bored to tears with descriptions of ECP, will keep this short.

Missed last year’s event – probably due to a conflicting event and I was pretty bummed that since last year, they had moved this to ECP rather than continue at Pasir Ris Park. The latter, in my view, is so much prettier and refreshing.

4 categories on the table: 15km, 10km, 5km and hand wheel chair with the 15km flagging off at 7:30 am followed in 15-30 min intervals for the rest. The 15km and 10km were basically out-and-backs with the former covering a larger loop.

First half (about 5.5km)
Can we say crowded? Yeah, what is new, huh? Not much of room for the first 2-3km and the narrow pathway obviously didn’t help. Spotted the race leaders on the opposite side around km4-5 and kept plodding on to the turnaround. The first half’s pathway wasn’t too “crowded” i.e. there weren’t that many runners and cyclists coming onto the path.

Second half
Right…turnaround…timing mat. The second half was a bit lot messier: sun in the face + families strolling + kids running all over the place + other runners and cyclists + narrow path. This is why any race/event in ECP should never be anything other than a training run. Ticked off a few gals on this section and tried to keep pace with a blond coloured hair dude (I kid you not! You can’t miss him). Spotted and passed 2 (or 3) hand cyclists around km7-8 and gave them a shout out.

Here’s a pic from June Teng where you could see me with the sun in my face. 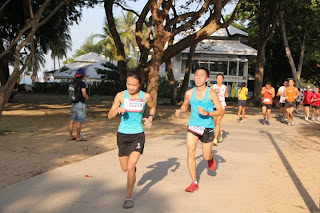 a) Great fundraising event and the organization was good given the circumstances.

b) Availability of shuttle buses from Bedok MRT to race start (typically I would take either a bus or cab to ECP).

c) Hydration station stocked with H2O and Pocari Sweat every 2km and at the start/finishing point.

e) Pace groups for 55min, 1 hour and 1:05 hours – have begun seeing these in recent events. Fantastic initiative. We don’t even have pace groups for the SCKLM!

g) This is the best: I think the organizers did right by having the cheque presentation event at the start (7am) which then ensures that even if the guest of honour was late (recent events come to mind: SGR, JLR), the flag off could still be on time. In this instance, we had a 30-min window before the first flagoff. 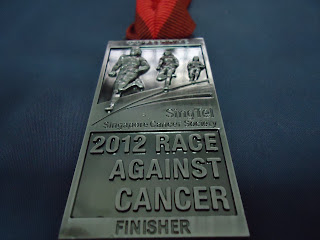 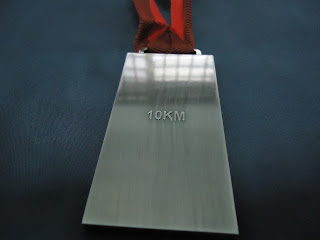 a) Shuttle buses were not arriving at 5 minute intervals – I think this was due to the congestion/non-moving traffic at Angsana Green. I got onto the bus at 6:55 am and it took me up to 20 minutes to reach the race start. Too many runners with cars and cabs flocking to ECP in addition to the regular weekend crowd. Perhaps they should have the drop off slightly further than Angsana Green (I’m sure most of us wouldn’t mind walking a bit) so the buses could have gone back to pick up more runners. Also more buses perhaps? I like the fact that the organizers acknowledged this shortcoming on their FB page and vowed to make it a smoother journey next year.

b) Reverse the route so the sun isn’t in your face? Gathered from one of the runners that it was the exact same route as the previous year. Then again, we’ll probably have to deal with the rest of the problem early on…and with so many runners at the start (rather than spread out towards the end), this might be the only option.

c) Not closed path so there were “invaders”. Hey, it’s a public park…you close it, you get brickbats from citizens. You don’t close it, runners complain. Guess you can’t win them all. 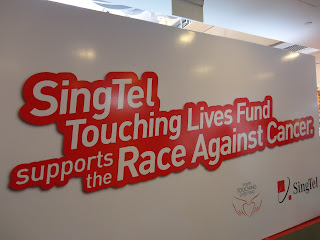 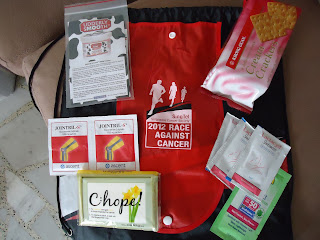 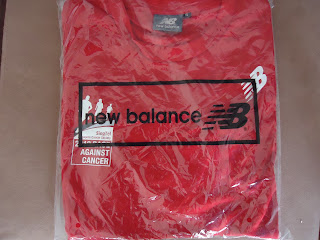 Email ThisBlogThis!Share to TwitterShare to FacebookShare to Pinterest
Labels: Run